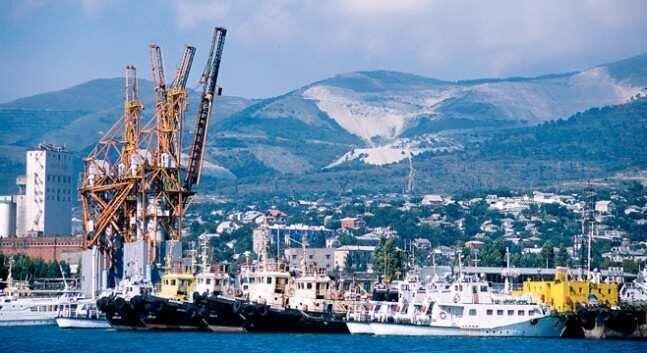 Taman, Russia (PortSEurope) July 21, 2019 – The RMP (RosMorPort) Taman consortium, which will get the concession for the management of the new Russian port of Taman, is expected to include five companies: RosMorPort, KuzbassRazrezUgol, MetaloInvest, Russian Railways (RZD) and SUEK.

Taman port is strategically located on the Russian side of the Kerch Strait that connects Black with Azov seas. It is on Cape Zheleznyy Rog (Iron Horn) across the strait from Russia occupied Crimea peninsula that is legally part of Ukraine.

Taman relies on the same road infrastructure that is used by the controversial newly constructed, €3 billion bridge across the Kerch Strait, connecting occupied Crimea to mainland Russia. Ukraine keeps protesting against the bridge which it considers as too low for large and high vessels to pass under.

A total of 23% of the ships that have been entering the Azov Sea will not able to do so anymore due to the bridge, while Mariupol port could lose up to 43% of its annual cargo traffic, the Ukrainian government said. It claims that after the construction of the bridge only ships with a length of up to 160 m and draft of up to 8 m will be able to enter the Azov Sea.

Russia forcibly annexed Ukraine’s Crimea Peninsula in 2014, claiming its ethnic Russian majority there was under threat from the Ukrainian government. Controlling passage from the Black Sea through the Kerch Strait into the Sea of Azov is a key element in asserting Russia’s broader claim to Crimea.

The current owner of Taman, state controlled RosMorPort, will own 22.5% of the new venture that would fully control the port. KuzbassRazrezUgol – KRU (75% owned by Iskander Makhmudov and Andrey Bokarev) will own 22.5%. MetaloInvest (owned by Alisher Usmanov 49%, Vladimir Skoch 30%, Farhad Moshiri 10%) will own 22.5%. SUEK – Siberian Coal Energy Company (one of the world’s largest coal and energy companies, majority owned by Andrey Melnichenko) will own 22.5%. State owned Russian Railways (RZD) will own 10%.

According to Russian Transport Ministry, the four investors (current owner, state owned RosMorPort excluded) will pay RUB 81 billion (€1.14 billion) during the first stage of the project for the port’s development.

It is expected that the Russian government will invest a total of $2.3 billion in the project, while the private investors will contribute a total of RUB 152 billion ($2.41 billion). These investments will cover also the cost of the port related transport infrastructure. The planned capacity of the port by 2024 is 66.9 million tonnes, which will be achieved with an investment of RUB 171 billion ($2.71 billion). Taman port handled 14.1 million tonnes of cargo in 2018.

For the second stage of Taman ports’ development in the period 2027-2030, it is expected that a container terminal and a fertilisers’ terminal with 37 million tonnes capacity will be built. Taman will also absorb cargo that the nearby Russian deep sea port of Novorossiysk cannot handle. Taman’s port entry is 20-25 m deep allowing up to 220,000 tonnes ships to enter.

Thanks to the implementation of industrial park projects in Taman, it is planned to eliminate the shortage of capacity for transshipment of bulk cargo in the southern part of Russia. The park will also realize the existing potential in the production, export and supply to the Russian market of petrochemical and agrarian products.

Global commodity trade Glencore is looking to nearly double its grain export capacity at Taman by purchasing the terminal usage rights of Ukraine’s Kernel Holding. Glencore and Kernel each held 50% of the 14.5 million tonne grain terminal at Taman with the right to split its capacity evenly.

Another company involved is state-controlled VTB, Russia’s second-largest bank, which owns holdings in two grain export terminals in the Black Sea port of Novorossiisk and is in talks to buy a stake in another terminal in the port of Taman.

Kernel is a leading and the largest in Ukraine producer and exporter of sunflower oil, and major supplier of agricultural products from the Black Sea region to world markets. Kernel exports its products into more than 60 countries of the world.

Glencore was Russia’s second largest grain exporter in 2017/18, according to grain carrier Rusagrotrans.

Whilst a newly-developed Taman port could complement Russia’s Black Sea port of Novorossiysk, it can only add further pressure on the Ukrainian Azov Sea ports of Mariupol and Berdyansk, both suffering from reduced cargo volumes following the Russian annexation of Ukraine’s Crimea Peninsula in 2014.