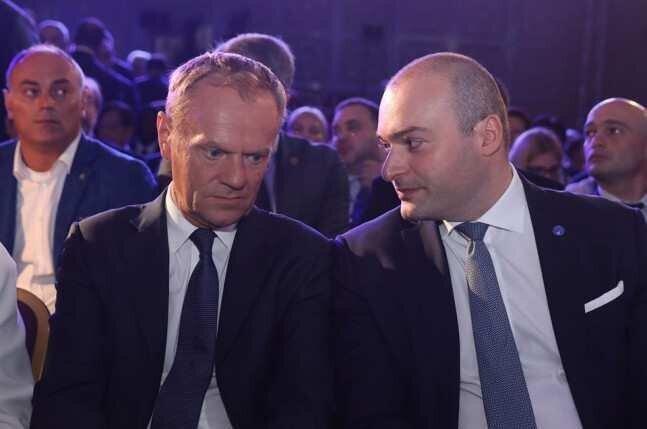 President of the European Council Donald Tusk has opened the 16th Batumi International Conference dedicated to the 10th anniversary of Eastern Partnership (EaP) on July 11. Tusk said in his opening remarks that EaP “was created, and has always been, an initiative of peace, not aimed against anyone.”


“When looking at the Eastern Partnership’s first ten years, it is evident that thanks to it and through it, our relations have become deeper, more structured and more predictable,” he said.

Tusk then recalled one of Georgia’s classics Vazha Pshavela saying that “every true patriot is cosmopolitan and every cosmopolitan capable of reflection is a patriot, ” which, he argued, “resonate as a warning against an isolationism that is on the rise in Europe and globally today."

“I believe that – by bringing us so much closer together, also as people, and by promoting understanding – the Eastern Partnership has helped counter these negative tendencies,” Tusk stated.

speaking of Georgia “as one of the countries painfully affected by serious security challenges” Tusk said although the EaP “was not designed as a conflict resolution mechanism, it is a community of values and principles and as such, it has strived to support stability in the region and to support your country’s ability to withstand pressures.”

“There are many questions about the Eastern Partnership’s future. And your future EU membership is not the only one… There are many in Europe who have doubts about further enlargement. I don’t have any doubts,” Tusk said.

He then said that “such processes do not happen all at once, or according to a single plan,” but they are made through concrete achievements.

“One thing is clear: we will remain an inclusive initiative to strengthen the relations between the European Union and all six Partners, while providing a differentiated approach to each Partner, according to their own aspirations and possibilities,” he added.

According to Tusk, following the 10th anniversary high-level Conference, which took place in Brussels last May, the EU is launching “a structured consultation process” on the future of the EaP, counting on the “active involvement and on contributions” not only from the EU Member States and Eastern Partners, but also civil society and business communities.

The 16th Batumi International Conference brings together high-level officials and representatives from academia, non-governmental sector and business from the EU and six partner countries on July 11-12, including Foreign Ministers of Armenia, Bulgaria, Czech Republic, Hungary, Poland, and Sweden.