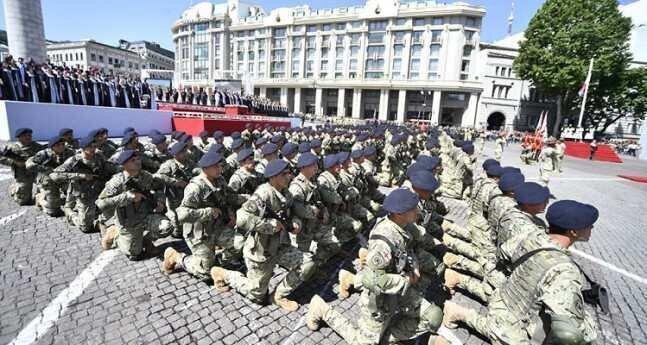 Today Georgians mark Independence Day, commemorating May 26, 1918 – the day when the Act of Independence was adopted, establishing the First Democratic Republic of Georgia.

463 recruits have taken their oaths today in Tbilisi, Zugdidi, Racha, Kartli and Dusheti.

Top Georgian figures have addressed the army and the people on the day on Freedom Square in central Tbilisi, praising the country’s past, the merit of the Georgian armed forces and focused on the country’s Euro-Atlantic future.

Georgian President Salome Zurabishvili stated that independence is the “biggest achievement, which needs to be protected continually.

”The remains of the soviet mentality still work as obstacles and create boundaries for the full transformation of Georgia as a free and the European state,” she said.

Georgian Parliament Speaker Irakli Kobakhidze stated that Georgia has never been so close to the EU and NATO as it is now, and the Georgian armed forces, their contribution for international peace, have played a “huge role” in this.

"Georgia is now respected and praised for its democratic achievements. I am sure that soon Georgia will become a member of the EU and NATO,” he said.

Georgian Prime Minister Mamuka Bakhtadze said that May 26 is the “most important day” in the Georgian history.

He stated that “our fight for independence still continues” and addressed the people living in the two Russian-occupied regions of Georgia Abkhazia and Tskhinvali (South Ossetia). "We cannot imagine our future without you,” he said.

Bakhtadze stated  that it is symbolic that Georgia’s national hero Merab Kostava, who was fighting for the country’s independence with the first President of Georgia Zviad Gamsakhurdia, would have turned 80 today.

He said that Georgia will have the scholarship named after Kostava.

Bakhtadze also commemorated Gamsakhurdia and the Georgian heroes who sacrificed their lives for the homeland.

He said that the Georgian government has provided various programmes to support soldiers and their families, “on whom the state stands on.”

He stated that Georgia’s aspiration to become the members of the EU and NATO serve the goal to protect the country and its people.

One person will be admitted every 6 square m - Gym, swimming pool safety guidelines