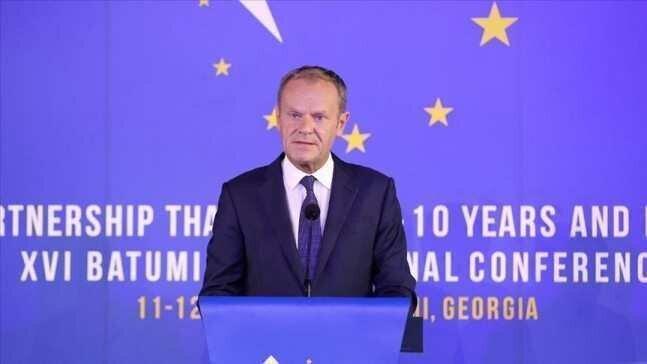 President of the European Council Donald Tusk said that for him Georgia is associated with high values and freedom.

Tusk said that Georgia managed to astonish Europe and the whole world.

"I call on you with an earnest appeal: don’t let yourselves become divided. Only when united will you endure. Like the whole of Europe,” Tusk said.

He stated that when looking at the first ten years of the EaP, “it is evident that thanks to it and through it, our relations have become deeper, more structured and more predictable.”

"You remember when the Russian President said in 2005: “we should acknowledge that the collapse of the Soviet Union was the greatest geopolitical catastrophe of the century.” Today in Georgia I want to say loud and clear: the collapse of the Soviet Union was a blessing to Georgians, Poles, Ukrainians as well as to the whole of Central and Eastern Europe. And I’m convinced that also to Russians," underlined Donald Tusk.

Tusk said that he was never in doubt that Georgia is a part of European civilization, citing famous Georgian Poet Vazha Pshavela:”some people think that true patriotism excludes cosmopolitanism. This is a mistake. Every true patriot is cosmopolitan and every genuine cosmopolitan is a patriot. Cosmopolitans serve their country and seek to uplift it intellectually, materially, and morally.'

"His visionary words, now over a century old, resonate as a warning against an isolationism that is on the rise in Europe and globally today. I believe that - by bringing us so much closer together, also as people, and by promoting understanding - the Eastern Partnership has helped counter these negative tendencies,” Tusk stated.

Tusk said that there are many questions about the Eastern Partnership's future and Georgia’s future EU membership is not the only one.

"But let us not hide the fact that this question remains currently on the agenda. There are many in Europe who have doubts about further enlargement. I don’t have any doubts. As was the case for the European Union itself more than sixty years ago, such processes do not happen all at once, or according to a single plan. They are made through concrete achievements, which first create a "de facto solidarity" – in the words of our founding fathers,” he said.

He said, however, that one thing is clear, that the EaP will remain an inclusive initiative to strengthen the relations between the European Union and all six partners, while providing a differentiated approach to each Partner, according to their own aspirations and possibilities.